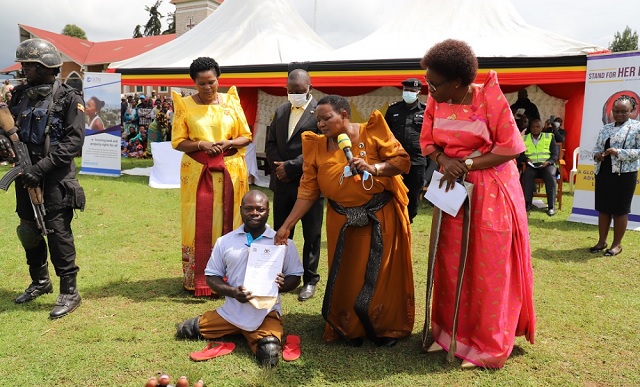 Robinah Nabbanja, the Prime Minister of Uganda has cautioned locals in Kigezi sub-region to stop the habit of land fragmentation. Kigezi is hilly and densely populated, which fuels land fragmentation. Parents often divide the land among their children.

While handing over 4,000 freehold land titles in Kitumba sub-county in Kabale district on Saturday, Nabbanja described the vice of land fragmentation as risky and a disaster to large-scale agriculture. She explained that once the practice continues in Kigezi, people will reach time and find themselves with no more land to share.

David Bahati, the Ndorwa west member of parliament who also doubles as the State Minister for Trade in the Ministry of Trade Industry and Cooperatives, said the program of giving locals land at a free cost is being implemented by the government of Uganda in partnership with the United Nations Human Settlements Programme, UN-Habitat with an aim of saving the locals the burden of securing their land. He also noted that the initiative is aimed at reducing cases of land wrangles in Kabale district.

In August this year, police revealed that an average of six cases of murder attributed to wrangles are recorded on a weekly basis in Kigezi region. David Muhereza, Kitumba sub-county LC 3 chairperson used the same platform to ask Nabbanja to help follow up on unfulfilled pledges made by president Yoweri Museveni.

These include among others the provision of a ferry on Lake Bunyonyi and tarmacking of Kabale-Lake Bunyonyi-Katuna-Kuko roads. In her response, Nabbanja said that the government has already secured US$ 70 million for tarmacking roads.