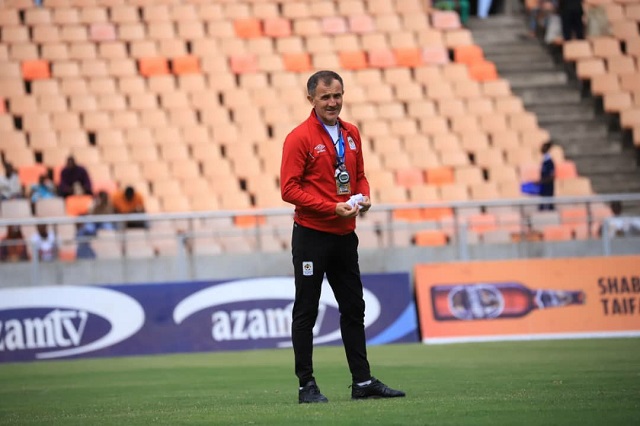 Uganda Cranes Head Coach Milutin Micho Sredojevic is preaching caution to his players ahead of the return leg of the TotalEnergies African Nations Championship (CHAN) qualifier against Tanzania.

The Cranes will host the Taifa Stars of Tanzania on Saturday at the St. Marys Stadium Kitende in the return leg.

Sredojevic has asked his players to avoid relaxing and undermining Tanzania ahead of the return leg.

Uganda has an advantage over Tanzania after winning the first leg 1-0 on Sunday at Benjamin Mkapa National Stadium in Dar es Salaam. Youngster Travis Mutyaba netted the single goal.

But ahead of the return leg, coach Sredojevic has asked his players not to use the early advantage to undermine the threat Tanzania can pose to Uganda. He says players should rule out that is much possible for Tanzania to make a comeback on away land.

This week, the Tanzania Football Federation (TFF) announced that they had parted ways with their head coach Kim Poulsen barely a day after losing to Uganda. TFF went ahead to appoint Zambian Hanour Janza as an interim coach.

Speaking about Tanzania’s new coach Janza, Uganda’s head coach says his counterpart is an experienced coach because of the rich history he carries in continental competitions, adding that he expects a do-or-die affair because of the experienced new coach.

After winning the first leg, Sredojevic’s charges will need just a draw to secure a slot in the CHAN finals to be hosted by Algeria in January next year. Should Uganda advance to the final tournament, it will be the sixth straight time Cranes is participating in the tournament.

The CHAN tournament is played between the best national teams of Africa, exclusively featuring players who are active in the national championships and qualified to play in the ongoing season.