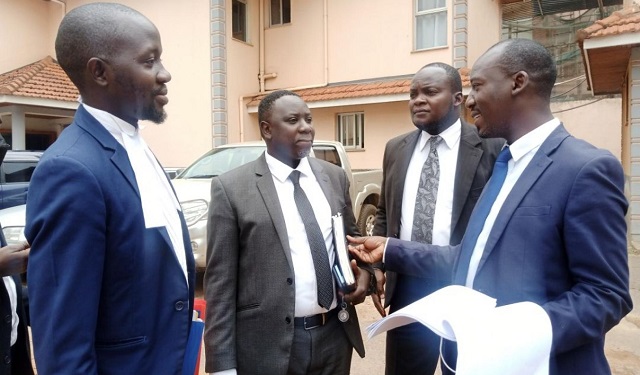 The lawyers representing jailed Kawempe North Member of Parliament Muhammad Ssegirinya and his Makindye West counterpart Allan Ssewanyana, have protested the delayed trial of their clients on charges related to terrorism.

The lawyers led by Samuel Muyizzi Mulindwa on Thursday protested the delay shortly after the Registrar of the  International Crimes Division of the High Court Beatrice Atingu further remanded the legislators and four of their co-accused, saying that the pretrial Judge Jane Elizabeth Alidviza had been transferred.

On November 21, 2021, Masaka Chief Magistrates court committed the group to face trial in the High Court on a string of charges including murder, attempted murder, aiding, and abetting terrorism.

The charges stem from their alleged involvement in the greater Masaka machete killings that occurred between March and June 2021, claiming more than 20 people, and also leaving scores injured.

When the matter came up today, Registrar Atingu informed the parties that the accused persons who have neither been produced in court by zoom nor physically are to be further remanded until September 20th, 2022 for mention to see if their file has been allocated to another judge.

But one of the defense lawyers Wilbert Muhereza said that the matter had been fixed for continuation of pretrial conference. He asked court that a new pretrial judge should be mindful that the accused persons have spent almost a year on remand without trial which is a violation of their right to a speedy hearing. The accused persons on September 7th 2022 will mark exactly one year in jail having been arrested on September 7th 2021 by the police in Masaka.

On their part, State Attorney Joseph Kyomuhendo indicated that they have already disclosed another set of documents they intend to rely on to prosecute the accused persons and expected today to mark those documents whose contents he didn’t reveal. His colleague Richard Birivumbuka who equally found when court had already started was not apologetic for the delay, saying that the court had started an hour earlier than it was expected and thus asked court for an adjournment.

But outside court, defense lawyer Muyizzi was not happy with the adjournment saying that the High Court is violating the Court of Appeal decision issued about two months ago requiring an expeditious hearing of this matter.

On June 29th, 2022, the Court of Appeal Justices Cheborion Barishaki, Christopher Izama Madrama and Eva Luswata denied Ssegirinya and Ssewanyana bail on grounds of lack of jurisdiction to entertain their application.

The same Justices said they had taken note of the fact that Ssegirinya and Ssewanyana have taken long on remand without being tried. They thus directed for the preparation of all files involving the legislators such that they are taken to the Principal Judge to have the case heard expeditiously and their human rights enforced.

But Muyizzi says that a copy of this order was extracted and served to the Principal Judge and they expected that when the Judge is transferred another one gets deployed immediately to replace her to hear the case expeditiously as directed but in vain. Muyizzi believes that everything happening in this case is already predetermined.

Ssegirinya’s mother Justine Nakajumba has also reechoed her appeal to President Yoweri Kaguta Museveni to pardon her son arguing that he is innocent and therefore the charges against him are trumped up.